skip to main | skip to sidebar

You know, there is one question I'd like to ask?

I've apparently bought my own fake from a Team Store without knowing---but I never cared either way.

Those who have "Real" Jerseys, what are your reasons?

Is it the status of owning an expensive jersey in your collection and "Showing it off"?

Is it displaying your pride in ones team?

Or is it being able to point out who's got the good stuff in a crowd and snickering behind their backs when they are out of sight?

Personally, a fake jersey is the same as an authentic---a flag one wears to celebrate their accomplishments or their failures in all it's aesthetic glory.

From the Dodger Blues to the Dolphin Aqua and Orange---what does it matter? Even most fakes are from the same country the Authentics are shipped from, so the line that "Where's the American Pride in buying Chinese Crap?" isn't going to work.

The Bud Vs. The King

"It's strange, it's one man, it's Bud Selig. You know Bud, get a life."
Pete Rose
Sports Net Interview-http://www.sportsnet.ca/baseball/2008/02/06/rose_sportsnet_exclusive/

With that quote, he sealed his fate. He won't get in til the "Bud" leaves the Commissioners Office.

Selig's stench on the game is as strong as any Marijuana plant I've ever encountered.

Nine Time's out of Ten, Bud has harmed MLB then he has every helped it.

Aside from the Mid-90's Development of the Wildcard, there is not one thing this man has done to help the game.

Steroids, Player Strikes, Exaggerated Contracts and the All-Star game are all major blunders under his watch.


The Game is on the Map these days because of two chemically enhanced sluggers from 1998 who took it upon themselves to become the Premier show in the nation at a time John Elway, Michael Jordan, and Wayne Gretzky all were honing their skills in preseason.

Without them, the MLB is still 2nd fiddle.

Selig, Fix the HOF election's if you want the Hall to keep it's credibility as having the best and most influential of the game.

Maris had an *astericks* for over 40 years. I think it's time to expand it to the Hall as well.

Let Barry Bonds*, Roger Clemens* and Mark McGwire* have their day in cooperstown.

Just make sure there is an asteriks next to their name, as well as anyone else who is under question or having been proven to have caused the game harm.

......Announces Unofficially that he has found the cure for HIV.

Congratulations to the 3 time NBA MVP and All-Star, who is also a entrepreneur, developer, and and humanitarian.

The 13 Year Vet plans to announce the latest cure in a tell all book, titled "If you got money, you got it all".

Kanye West Released the following Press Release:
"You know the best medicine go to people thats paid,
If Magic Johnson got a cure for A.I.D.S.
And all the broke muthaf$%&*ers past away
You tellin me if my grandma was in the N.B.A.
Right now she'd be ok?"

(this post is mostly in jest)
Posted by Tubby at 3:35 PM No comments:

Mike Vick is an Eagle 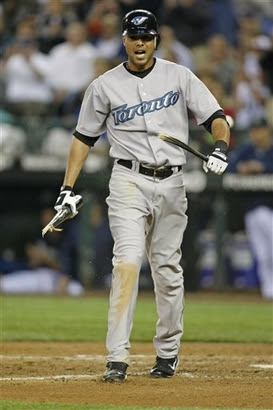 I'm going to reguratate alot of whats been said, but it's important to note.

There is a better chance of me burning down the completed stadium in 2012 if this move does happen (Don't want him, or his massive contract playing in Miami blocking either Cody Ross, Chris Coghlin, or Cameron Maybin.)

With over 60 Million due to him through 2012, he's a likely bet to spell Melky Cabrera in New York, Gary Sheffield in CitiField, or even Alex Rios himself in Toronto.

One intriguing option is also the Chicago White Sox. They have expressed interest in the past, and could have the funds to take on such a salary.

Through Deductive Reasoning Buster Olney of ESPN has signaled out the White Sox as the claiming team. Basically stating they wanted him before and Dye is a possible FA this year.

Dye and Rios would be salary washes next year and Rios can be a super sub, playing 6 days a week at different positions to give Thome, Dye, Quinton, Posednick, and Konerko time off.

Not to mention he's 28 years old and only looks to play better in a new park/home. The White Sox like his upside.

Edit: Another Option, San Fransico could be the claiming team. Rios has been rumored to be moved there before, and since most GM have a preconceived notion of players they have missed out on, he can still be enamored.

Past deals have been rumored to include Tim "Freak" Lincecum and Matt Cain.

Now, it just might include a Minor Leaguer to be named later or a package of 10 bats.
Posted by Tubby at 7:10 PM No comments:

I've played Fantasy Football since I was knee high to Shaq (16). One of the first things anyone asks another owner is "Who are you going after?".

To be honest, I always tell them a Running Back. I'm not foolish enough to name names, and I certainly won't let you pick my guy and hold him for ransom.

One reason or another, I always pick a Running back in the first 4 rounds. All four.

Reason being, if you have your Running backs set--everything else will fall in place.

There are the rare years Terrell Owens will find his way to me in Round 3---and in that case you take him.

Another oddity, I always end up with Brian Westbrook. I have no clue why. I'm not an Eagles fan, I'm not a Cowboy Hater, and I certainly am not a Westbrook fan. Face it though, he can play better then 20 other teams starting Running backs.

Over the next week, leading up to my draft, I'm going to try to keep a day by day position by position account of what to draft, and when to draft it. I'd like to see my readers (all 3 of you, not including the owner trying get my strategy) win. Winning breeds Mojo, Mojo Brings Good Cards--- We need more Mojo.
Posted by Tubby at 4:26 AM No comments:

I'm Lazy. I feel compelled to write, but have no clue what to write about.

From now on, if you stumble upon my ramblings, leave a comment as to what I should write about.

I'll be more then happy to oblige you with my opinion on everything from Cards to Kotex.
Posted by Tubby at 4:25 AM No comments:

Sorry for the Delay

Sorry for the delay in updating this site, to the few of you who have passed by.
With the long summer days and the thrill of collecting I've seem to have taken quite a Hiatus.

Don't worry, I'll be back soon. I have way too much to show off.

For instance, My Piazza Collection.

If anybody has any Piazza cards, leave me a comment with your email address. I'll be sure to find some goodies for you, heck---you can even destroy my photobucket. Beckett means nothing to me, so if you see a $100 Card in there (Rare) and you have a $15 Piazza I want---Take advantage of me as if it were Prom Night.

My next post may be on Fantasy Sports. Maybe on the mockery of the Dying Democratic System. Maybe even about how much of a tool Roger Clemens is. More then Likely, It'll be Fantasy Sports and Fantasy Football.

Have a great evening, and until we meet again tommorrow---Goodbye.
Posted by Tubby at 9:53 PM No comments:

Marc Andre Fleury, I am an Idiot.

I will continue to rock my White Reebok Practice Jersey with your name emblazoned upon the back and play with swagger in my Sport Gold Replica's of your old pads.

You beat the best in their house on the biggest stage of the game. You deserved that Conn Smythe after the game you played keeping the Wings at bay. You earned a share of that trophy with perhaps the most exciting save in Stanley Cup History, although it was in desperation.

Perhaps you can go back to "teh sportzgoldz beeboxers pads" that us hockey players fawned over as recently as a year ago.

Perhaps, you don't have to do a damn thing. Your the best at your position right now.

Enjoy that Cup. Take it apart. Eat cereal out of it. Find some kid to place inside the Lord Stanley's Chalace. Use it as a dog bowl. Throw it in a river for a night. Just don't defaecate in it (or at least don't tell anybody about it).
Posted by Tubby at 4:13 AM No comments:

Brief and to the point.

Why was it necessary to ruin such a beautiful name for a stadium such as Shea Stadium, Joe Robbie Stadium, or the Skydome?

With such a rich history behind Shea Stadium and the reason why it's named, why would they sell the naming rights to CitiBank? What's Ironic is that it has yet to effect the way those who travel to Queens Borough call the new Ballpark.

I figured I'd give a little free plug today for what I think are some pretty awesome shirts. Over at No Mas, they have devised a cool little T-Shirt Campaign that I plan to purchase a few shirts from. Right now I believe they only have Shea Stadium and Joe Robbie, but eventually they plan to add other cities.

Give them a look. You won't be disappointed in their creativity or design.
Posted by Tubby at 3:34 PM 2 comments: